The Russian/American Educational Project, a joint project sponsored by SW Moscow School district and private funding in the USA and Canada, was established shortly after the breakdown of the former USSR. The project's objectives have been to help support Russia's educators in establishing democracy both in the classroom and society. 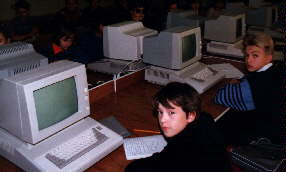 Historically, Russians have been excellent in teaching the natural sciences. However, when it came to the humanities, Communism squelched many facts; it was necessary to stick to the Party line, even if truth was compromised. The didactic, teacher-centered teaching style often made the humanities rather dull subjects. The Russian educators asked us to provide teachers to model American teaching styles, with the express purpose of incorporating democratic principles in their educational system. They also wanted us to help them develop some guidelines for morals and values. With the demise of the police state, there was a large moral vacuum; teachers sometimes had problems with behaviour and self-motivation with their students. Our staff taught history, English, sociology, psychology, economics, computer science, civics and ethics.

The Americans and Canadians who made up the teaching staff were an amazing team of people.  They integrated well with the Russian culture. They developed connections not only with their students, but also with their Russian colleagues. The team of up to thirteen teachers at a time spent at least one academic year.  Our program had teachers in 9 different SW Moscow schools, though they developed contacts with teachers and principals from many more separate Moscow schools, both public and private, in elementary schools, secondary schools, and universities. The staff benefited immensely from their exposure to the Russian culture and educational system.

The Russian/American Educational Program made a two year commitment to provide model teachers. In fact, the program stayed in Russia for three years.  The cost of living in Moscow escalated, so at the end of the third year we completed our work and transferred our work back to the Russian nationals.

Our program also established a cultural and study exchange program for Russian students.  Many students spent between six and eight weeks in the USA.  While they spent most of their time with host families in Washington State, they also took a two week trip to California. Some students have returned to study in the USA. 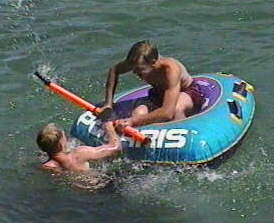